Yup. I did it. I walked out on the lake. Actually, I did it a couple weeks ago with a coworker, but now I have photographic evidence. 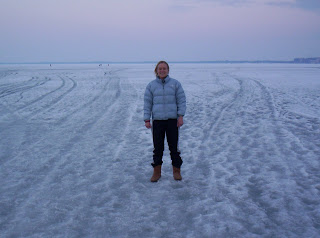 I have to admit, even though it feels solid, it was still a bit disconcerting- especially because it was 45 degrees out. But hey, people were driving ATVs out there, so I figured it had to be fairly safe. However I fear(hope) that it will be thawed out before we have another photo op so I made D stop on the way home from the gym so we could take advantage of this one. Plus, it lets me check off another of my 101 in 1001 goals.

Now that the snow is melting, we are entering the nasty part of winter. 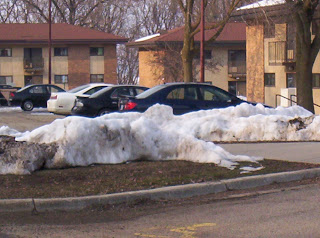 The part where you start to find things that have been buried under the snow for months. 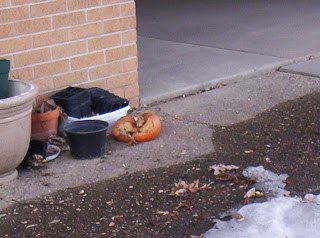 But winter won't be officially over until this bad boy has melted. 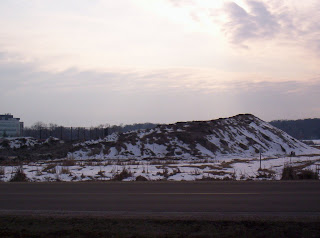 Yes, that is a mountain of snow. Yes, a dump truck can drive up the side of it. No, it won't be melted until June.

On a completely different note, I'm am pretty darn sore from lifting weights yesterday (detailed post about what I'm doing to come tomorrow). The heaviest thing I've curled in the past few months is a double scoop waffle cone, so I'm feeling the burn. But it's a good burn. And I know things can only improve from here.

The workout plan is 6mi with pick-ups and some yoga after work. I'm planning to run inside because I'm doing some speed stuff, and it's really foggy outside right now. I'm definitely going to get out again at least one day before the the race.

Alrighty. I'm channeling EE, and I'm ready to get pumped up for Monday! Have a good one, all.
Posted by Chelsea at 5:30 AM