One final work day before I start a 5-day uninterrupted string of chill.  No 4:40 am wake up calls.  One small trip planned but mostly just time to relax. 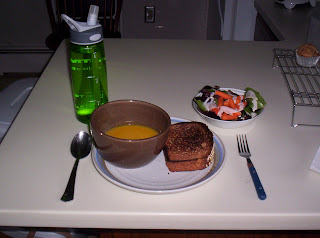 It should... it's the same picture from yesterday, but who says you can't eat the same meal two days in a row.  Especially if it's tasty.  (No Cincinnati chili from the side bar because I realized I forgot to buy tomato sauce :( ).
I did, however, make some delicious but unattractive caramel apple oatmeal cookies for our church small group meeting last night.  Maybe something is wrong with my leavening agents... my muffins didn't rise, my cookies fell apart.  I opened a new box of baking soda, but what I thought was going to be a new box of baking powder was actually opened already, too.  Still, they were popular.  This is all that's left of 2 dozen: 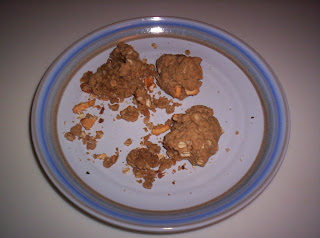 The other problem with the recipe was that if one of the pieces of caramel was touching the pan when they cooked it oozed and burned.  The recipe doesn't address this issue, but I think it would be better to leave it out at first, and then just stick some pieces in the top of each cookie after they are formed on the sheet.
Because we are going to be traveling on Thursday, I'm doing my tempo run this morning.  It's another progressive run, but this time I'm going to try a different course that should have less traffic and construction.  I hope it goes well.  I'm still in this not sick/not well limbo- stuffy nose, headache, coughing, and maybe a little stomach weirdness- but not bad enough that I'm stuck in bed.  Hopefully all I need is a little vacation to cure me!
Posted by Chelsea at 5:42 AM