This might be taking the cheese thing a bit too far

This was the Quote of the Day from April 19 in Time Magazine (hat tip to the Accessory Fairy, now also known as the Blog Idea Fairy):

This microbe is really a very hard worker.

In honor of our state microbe*, I made pizza for dinner last night.  Cooking Light (see sidebar for recipe) calls this something like California smoked salmon pizza.  I call it bagel pizza.  I think you can tell why. 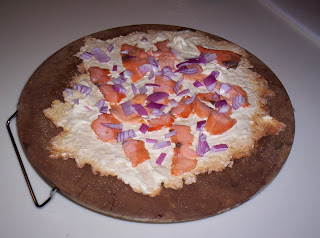 You roll out your crust really thin and bake it until it's done.  Then top with cream cheese, smoked salmon, and red onion and bake just until the toppings are warm.  This was an interesting idea, and I loved the crispy crust, but the smoked salmon was a bit salty for me.  I don't know if it's the brand we bought or just the nature of smoked salmon.

Anyway, it's time to get moving.  I'm planning for 6 easy miles, and I need to dig out my tights again.  It's "feels like" 33, and I don't feel like being cold.

What would the official state microbe of your state be?
Posted by Chelsea at 5:42 AM