You're never too old

To go sledding for the first time
We took advantage of the fresh snow (which we seem to have more and more of every day) to stop by Elver Park and go sledding yesterday.  It's actually a pretty big hill, and the picture below (which I didn't take) doesn't do it justice.  There weren't very many people out which was good because I wasn't afraid I was going to plow into anyone but bad because that was because it was really cold.

We only did a few runs, but it was pretty fun.  You really get going on the end.  Once I got back in the car, it was easy to convince myself I would have liked to go down a few more times, but that but the walk back up to the top was long and windy.  Maybe winter isn't soooo bad afterall.

Or to eat really unhealthy food 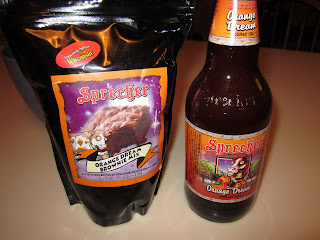 Yes, that would be brownies made with orange soda- a special gift to you from Wisconsin- land of unhealthy food.  Sprecher is a root beer/beer brewery in Milwaukee, and they also sell other sodas and novelty food products.  For Christmas I ordered orange brownies my brother and his girlfriend and root beer cookie mix for J+A and my in-laws, so I had to get something for us to try as well.

The brownies themselves turned out pretty thin, and they didn't taste like orange soda (or look orange).  Daniel's evaluation was that they "tasted like brownies."  I thought they actually tasted kind of like tootsie roll.

And that was the end to an otherwise fairly productive (we gave our apartment it's first good scrub in about a month- mea culpa- we've been gone!) day.

Workout:
8 sloooow miles in combo dry and slush.  Today is a rest/yoga day.
Posted by Chelsea at 6:42 AM