After punting last week and pretending that I'd never eaten frozen spinach in a frittata before, this week I give myself an A for New Year's Resolution #1 - try one new veggie or preparation each week- because I actually tried 3.

#1 - Trader Joe's roasted turnips and carrots (served with sauteed chicken with sage browned butter from this month's Cooking Light).  TJ's has a great frozen vegetable section, but you never know what will be there from one week to the next.  These were nice and firm out of the oven and had a lightly sweet sauce.  Good stuff. 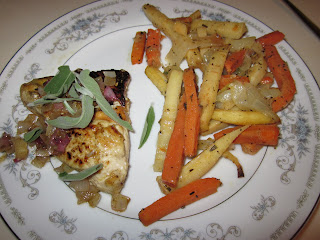 2. TJ's healthy 8 chopped veggie mix - I eat a salad almost every day for lunch, and I wanted a way to add extra veggies without having to buy (and chop and store) a zillion whole vegetables.  I'm not sure if this was a new item, but it was the first time I'd seen it, and it was exactly what I was looking for.  8 veggies, chopped and ready to be added to a salad by the handful.  The only thing this mix contained that I don't like was celery, and it was the last ingredient on the list and easy to pick out. 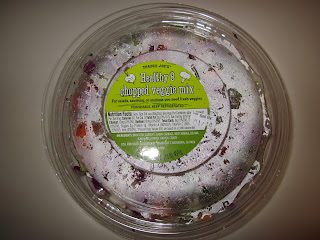 3. Chicken fried "rice" with leeks and cranberries - This was another CL recipe but instead of brown rice I used cauliflower.  I steamed the cauliflower the day before and stuck it in the fridge overnight.  When it was time to make dinner, I chopped it up into little pieces and cooked it just like the instructions called for "frying" the rice.  This actually worked really well.  Both of us decided the recipe needed some soy sauce and rice vinegar, but the cauliflower was a perfect veggie stand it for the rice.  With all the other flavors in the dish, it didn't taste cauliflower-ey or vegetable-y at all. 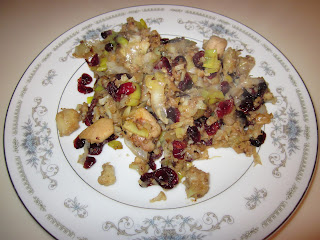 Workout:
I debated on running outside vs going back to the gym this morning and decided on the gym.  It just takes so darn long to get ready to run outside when it's cold, and I'm definitely planning on going tomorrow.  Only 6-7 more weeks of winter- le sigh.
Posted by Chelsea at 5:35 AM