It's a fine day for a protest


Yesterday I finally got to go down and check out the protest.  Many public employees (myself included) didn't leave their jobs to go downtown during the week, plus people were getting bussed in from out of town and there was supposed to be a counter protest so this was going to be The Big Day.   When we got downtown at about 10:30am the crowds were still relatively small and focused on the State St. side of the capitol, but there was a steady stream of people coming down throughout the rest of the morning.  We did see some pro-Walker protesters, but I'd guess they made up less than 10% of the people downtown, and- in true Wisconsin style- everyone was peaceful and polite. 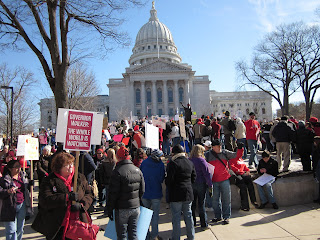 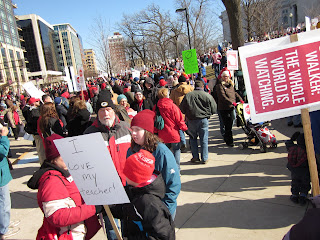 We hung out for awhile, listening to some speakers, and then had lunch and walked back when the crowds would be larger.  One thing the protest has been good for is business on State St.

When you are actually there, you really understand that the protest is not about the increased employee contributions to make up the budget deficit, it's about collective bargaining rights.  In fact, all the unions, including teachers, have agreed to the financial part of the bill as long as unions still retain their bargaining rights (which costs the government nothing), but Walker will not agree to that.  And if the governor does succeed in ending the collective bargaining rights we also lose something like $9million in federal money for the bus system.

Even with all the chanting and marching around, the crowd wasn't angry.  You could almost imagine yourself at the farmer's market.  And people showed that they still had a sense of humor. 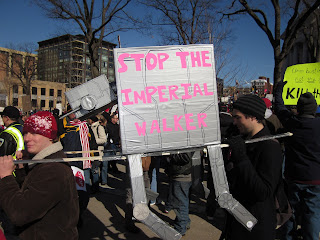 This was also the week of the winter festival, and even though most of the events were cancelled, we did get to see this guy carving ice sculptures 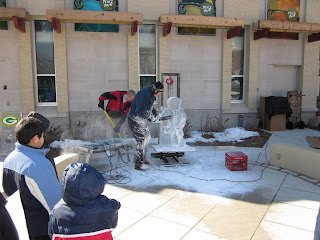 There will be protest events today and tomorrow- Monday is a state furlough day so workers will still be downtown- but we are hoping all will be back to normal by Tuesday.

Before the protest I got in a good 11.5mi long run.  It was kind of cold and my legs were stiff, but I kept a decent pace through the whole run, averaging 9:27min/mile.  I could have pushed myself more, but my right leg felt super tight toward the end.  My shoes were pretty old (400-something miles on them), so I used a Groupon to a local running store to get a new pair yesterday.

All in all, a pretty exciting Saturday.
Posted by Chelsea at 7:20 AM