In praise of a well timed rest day

And the medicinal properties of the McFlurry 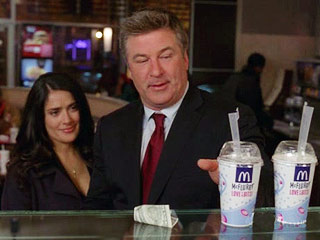 I don't usually dedicate a whole post to a run unless it's a long run or a race, but yesterday's run deserves to be documented.  I actually started out a little unenthusiastic about running.  I was having one of those days after a rest day where my body says, "Maybe I actually like to just sit around... ever think of that?"  But I know that's not true, and I would have started to get stir crazy if I didn't work out for a second day.  So I laced up my new shoes (I'm breaking in a new pair for the race, woot!) and took off.

It wasn't as hot as Tuesday, but it was still fairly warm and humid.  I felt really peppy, but I was nervous about looking at my watch because there have been many times this summer when I've felt like I was going fast only to be very disappointed with my pace.  It wasn't light enough to see the first mile split but it ended up being 9:30, which is a decent first mile pace for me.  After that I just sort of went.  I wasn't going easy, but I wasn't try to run like a tempo pace either.  I was feeling good and tried to roll with it.

Obviously I was super glad to see that I can run at marathon goal pace (which will be helpful Oct 3), and that my speedier pace wasn't just due to cooler weather.  Now I just have to be able to do that for 21.2 more miles.  No problem :)

Have a great Friday and long weekend, everyone.
Posted by Chelsea at 5:39 AM