Flying out last Wednesday was no big deal.  I'd fretted about storms in the area, but fortunately we were free of delays.  We arrived in Seattle in the late afternoon, had dinner, and called it an early night because our bodies were still on Central Time.

Thursday morning I got in a run on the treadmill- 8 mi with 15 min at marathon tempo pace (6.9 mph on the 'mill).  We conferenced in the morning, and in the afternoon we took advantage of the beautiful weather to do some sight seeing.

We had lunch at the Space Needle and got some good pictures of the city from the observation deck. 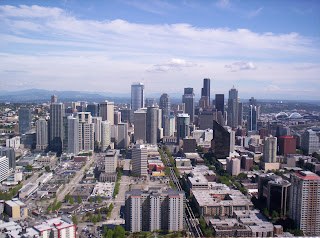 The Space Needle- if you've never seen it- is very 1960's Star-Trekey on the outside, but surprisingly modern on the inside.  No pictures from lunch because they all show a coworker who would be *very* unhappy if I put her picture on the internet. 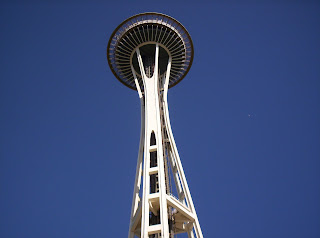 We also checked out a sculpture garden nearby.  These concrete eyes actually have chairs on the other side! 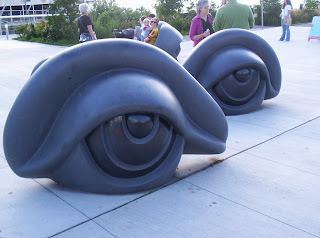 If only I'd brought my bathing suit... 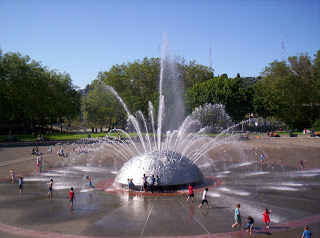 The next day was mostly spent conferencing, but we did get out at lunch for some window shopping at Pike's Market. 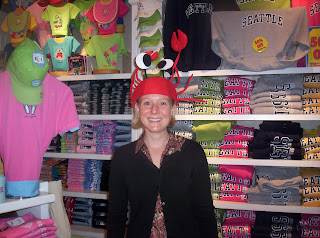 And in the evening, we presented our posters.  I actually had a few people talk to me about mine.  Yay, science! 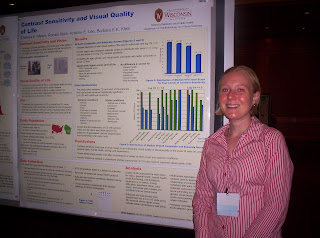 Saturday morning I did 6mi and strength training, we conferenced some more, and flew back to the Midwest.

That's it for now because I have to get out and run.  I'm planning 7mi with 2x15 min marathon tempo.  Notice I didn't say anything about a workout on Friday?  See the hint that I said we flew back to the Midwest, not Madison.  Stay tuned for tomorrow's feature- Seattle: When Travel Attacks.