The natural
Baby spinach and lettuce coming in (bottom right).  Moving up in the picture, a row of broccoli and a row with two sweet potatoes. 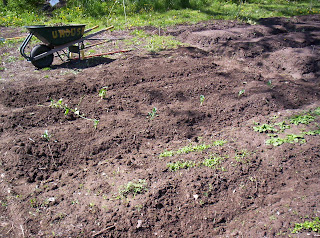 Baby spinach, lettuce, and onions (looking at the other side of the plot). 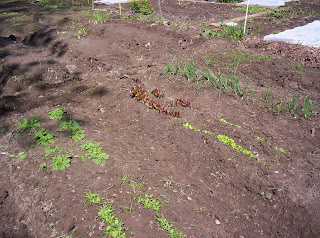 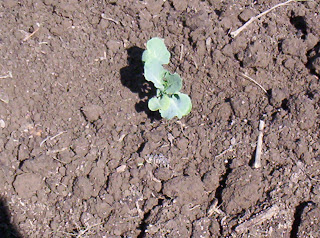 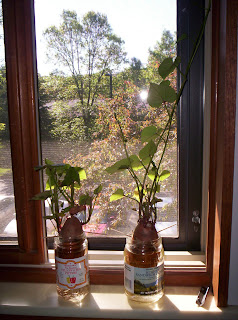 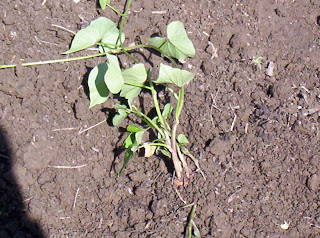 In sum, we pulled a lot of weeds, turned over three new beds, planted broccoli, the two sweet potato plants, pickling cucumbers and some pumpkin seeds, and harvested a green onion (featured later).  We have about three rows left with plans for tomatoes, carrots, and winter squash.

The Unnatural:
Goose rage - For those who aren't acquainted with geese, they are mean and not afraid of anything.  The ones here are Canadian geese, and they stop by to have babies, which makes them even meaner.  They will plant their flock in the middle of the road and not move for anything, and if you decide you'd like to walk or jog on "their" walking path, they will hiss at you and sometimes actually chase you away. 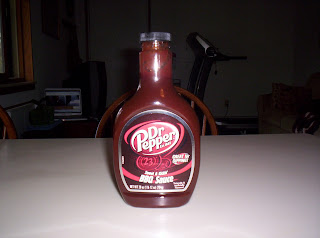 The mere existence of this product caused Michael Pollan to schedule three extra therapy sessions this month and Jamie Oliver to scream the F-word and punch a kindergartener (but apologize immediately after).  Don't let them know there's an A&W Rootbeer flavored barbecue sauce, too.

Truthfully the nutritionals on this guy aren't any worse then your run of the mill barbecue sauce (for better or for worse).  D said it pretty much tasted like barbecue sauce.  I guess his palate isn't nuanced enough to get the other 23 flavors from the Dr. P.

It was used to make D's lunches for the week.  Barbecue (I'm getting tired of typing that word) chicken pizza.  But it's healthy because I used whole wheat dough and a green onion from the garden, right? 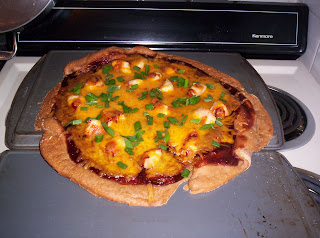 Well, I'm headed out to run.  I was planning on strength training today, but it's supposed to rain tomorrow, and I don't want to waste a lovely day (even if it's 34 degrees air temp!) inside.  Have a great Monday, all.
Posted by Chelsea at 5:44 AM