So I totally saw another runner get dive bombed by a blackbird yesterday.  I didn't have my camera with me, and I couldn't find a picture of an actual bird on runner attack, so you'll have to use your imagination a bit.

It was sort of like this, except the guy I saw was by a lake, not waiting for a subway, wishing he'd sprung for the fried rice rather than the white because, really, it was only $0.57 more.

Or this, except the guy I saw was running, not frantically trying to make a casting call for extras on the Jersey Shore the day his car broke down. 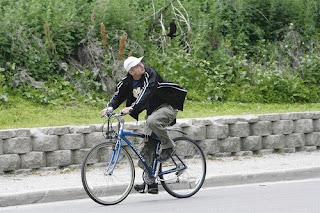 Or like this, except the guy I saw was human, not a bird.  I'm thinking that blackbird is about to get it.

I can totally see how it's going to go down.  Gov. Scott Walker will come on TV to give us the announcement.

"Good people of Wisconsin, it has come to my attention that there are far too many geese in Madison.  Did you know animals only pay for 63% of the cost of their health insurance.  Unacceptable!  I took my pugapoo to the park last week and stepped in goose poop.  Disgusting!  Something must be done!"

"Now I know that you're going to get all up in arms about this.  Just like you always do.  I can never get a freakin' break around here.  But this time I've come up with the perfect solution." "This resolution gives the Department of Natural Resources the power to euthanize the geese by force feeding them."

"You just grab the head, and cram the food down their throat.  It's waaaaayyyyy easier than spreading around a bunch of poison."

"We will give one free fois gras dinner to every business that commits to relocating to Wisconsin.  It's a win-win for everyone.  I don't know how this plan could not work!"

Ever been attacked by a bird and/or other animal while running or seen someone on the wrong end of a bird beak?  Or- if you are tech savvy vampire who avoids sunlight at all costs- do you play Angry Birds?