That I'm not a total degenerate (every day) when it comes to preparing healthy food, I give you last night's dinner: 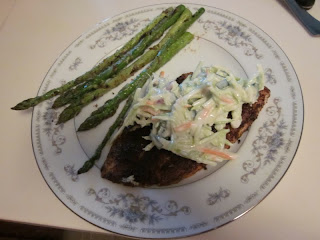 Broiled asparagus and spicy catfish topped with honey-lime coleslaw (riffing off of this Cooking Light recipe). Plus strawberry rhubarb pie, which is not pictured because it turned into strawberry rhubarb soup with pie crust garnish, but it was still really good.

So far we are two for two on good on our use of the CSA veggies (rhubarb + asparagus).  We still have some kale, some chard, two root things that *might* be ginger, some spring mix, and a bunch of arugula(?) to go.  Any tips for tasty ways to prepare the kale, chard and arugula?  I've seen arugula on top pizza before, but we have about 10 pizza toppings worth of it.

Even though it's only a four day week, I'm already ready for the weekend.  Not so much to take a break from work but to sleep a little later.  Just a little because I know that it's best to keep one's sleep schedule as stable as possible, but getting up that extra hour earlier coming off of vacation has been brutal!  Plus it's one thing to go to bed at 8pm in January when it's already been dark for 4 hours and quite another to try to sleep at 8pm now when it's light out and kids are out and neighbors are opening squeaky doors over and over and over again.

After work today, I'm going to a retirement party for a co-worker, but other than that I have no concrete plans for the weekend so far.  Maybe a trip to the farmer's market is in order?  How about you?  Got anything fun going on?

Okay, gotta get it together to go to the gym while I'm still not running late.  First time this week, yay!

Oh!  And last, but certainly not least, a huge congratulations to Dr. J!!!!  Can't wait to see you and A in August and crash at your freshly painted new place sometime.
Posted by Chelsea at 5:40 AM