Saturday was my annual night out after 10pm!  Daniel and I went sent to see a friend- the husband of second from right- play at Quaker Steak and Lube (yep, a gas station themed restaurant/bar).

This was kind of a "reunion show" for our friend's band- except this year he didn't play with a band, he played with a guy who wasn't in the original band- I think?  The dynamics were kind of confusing.  The important part is that I'm fairly certain I haven't been out that late since his show last year.

Then I slept in until- gasp!- 8am the next morning.  My life is a Katy Perry song.

Although I don't remember anything about her making her own nectarine fro-yo ice cream sandwiches.  Mmmmm.... sprinkles. 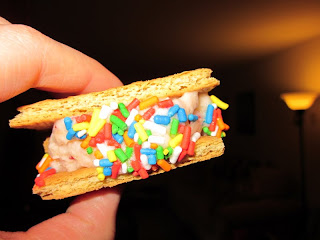