Daniel and I almost always go out to eat on Friday night, and this past Friday we decided to check out the Dumpling Haus that opened a few weeks ago in the Hilldale Mall.

The restaurant itself is a low key affair.  It's pretty small with an open kitchen, and the "drink machine" is a pitcher of water in the corner with cups.  The main attractions on the menu are the jiao zi, which are little dumplings, and the bao zi, which are big dumplings.  They also serve some noodle bowls, salads, and rice.

We ordered the house jiao zi 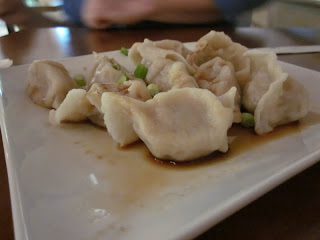 and the house bao zi 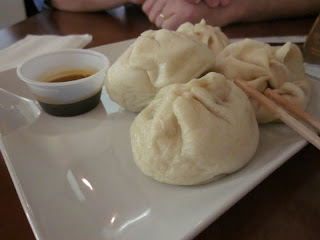 which were both stuffed with pork and scallions and served with a soy dipping sauce.

Both items were tasty and freshly made.  If you got bored watching the video about the Himalayas that was playing on a TV in the background, you could look in the kitchen and watch the kitchen staff preparing the food.  However, that means each dish is brought out to your table as soon as it's done.  Better to order a few things to split and eat them as they come than to have one dish sit and get cold before the other one arrives.

Would we go back?  I think so.  It's in a convenient location for us.  The prices are reasonable for a quick dinner out, and you can't just walk around and pick Chinese dumplings off the trees here like you can with cheese curds and bratwurst.  The only thing I'd do differently next time is- other than try different varieties of the dumplings and noodle bowls- is add a salad to share.  Although the menu describes both of our orders as containing vegetables, but I think that was true only at the atomic level, and a salad or some cooked veggies would round out the meal.

While I have no complaints about the restaurant staff or service- we had no trouble communicating with the man taking orders- I think there's some kind of weird translation thing going on.

For one, Dumpling Haus? But they serve Chinese dumplings, not German dumplings... if such a thing exists.  And also the slogan on the door.  We're steaming... hot.  I have absolutely no idea what that's supposed to mean.  Anyone???  Really- am I being dense and missing something obvious?  I mean, I get that the dumplings are steaming hot, but what's up with the ellipses?  Oh well...

In other news, I'm glad today is a rest day.  Getting back into lifting weights after taking a week off to recover from attempting two max lifts and to travel to FL made me crazy sore.  Plus, even though my max deadlift and bench press only went up about 5% from last training cycle, the regular workouts feel tougher (at least for the deadlift) already.  This was the first week of the training cycle and I'm already at 3 sets of 1 at 95lbs on the bench press and 3 sets of 1 at 130 on the deadlift.  AND- if you'll permit me one more whine- the squat rack at the gym that is open in the mornings during intercession has bars that run along the sides that aren't removable so can't actually deadlift in the squat rack.  You have to either a)Take the bar out of the squat rack and do all your weight changes on the floor, risking a smashed finger (which has happened to me already) or put the weights on the bar and then turn sideways and squeeze out through the tall bars on the back of the rack, which is not a lot of fun when you're already carrying a heavy weight.  Fortunately there's only one more week before the regular gym opens in the mornings again.

But I'm getting ahead of myself... time to go and enjoy today.  Have a good Sunday, folks.