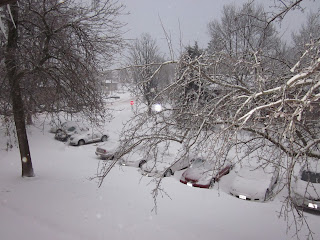 The bad weather we were supposed to be getting all day yesterday didn't arrive until about 5pm last night when we started getting really slushy snow.  We had tickets to see the Second City Christmas show last night, but after a trip to Borders at 6pm, we made the executive decision not to go.  It was disappointing because I'd been at home all day long, and the tickets weren't exactly cheap, but it was the right decision.  The roads were already slick at 6pm, and we were forecast for 9-12 inches overnight, so the driving conditions were only going to get worse.  We lost power for a little while around 9pm, which was kind of scary because no power = no heat = cold, but I think it came back on before midnight.

Being snowed in is kind of a funny thing.  I went to sleep at 9pm because the power went out and what else were we going to do, and I slept in until 7am because- again- what else was I going to do.  Yesterday, I did allll my Christmas cards, cleaned the house, watched 4 episodes of Glee, and finished making my ornaments (well, almost, I want to make one more to replace an ugly one), and today all I have on my agenda is to make our edible gift for co-workers/friends around here.  It's a forced time of rest and relaxation that's probably more "natural" from the standpoint of human history than our always on the go lifestyle.  I mean, without plows we'd be stuck inside for days or weeks (not that I want that!).

I did get in a slow but beautiful run yesterday morning.  It was warm-ish and not windy, and some tiny little snowflakes started to fall just as I was finishing up.  This week will probably involve a lot of inside running because it's going to get cold - like overnight lows with air temperature below 0.  Definitely outside run-able, but not fun.

I leave you with: How to get a tan in Wisconsin in December.