Back to Life, Back to Reality

Sadly, the traveling part of our vacation is over, but luckily I don't have to go back to the work part of reality until after Memorial Day.  Rather than do a blow by blow of the entire trip, which is kind of boring for you and for me, here are the highlights of Vacation 2011: The Mid-Atlantic Edition.

Best part of vacation:
Seeing my wonderful family- both the family that shuffled me onto this mortal coil and my family-in-law.  Thanks for the great time!
Runners up: Being warm and wearing shorts and sleeveless tops. (It's currently 52 and windy in Madison).

MVP of the trip:
Our car, which allowed us to add 2k miles to the odometer without complaint. Best meal:
Watts Grocery in Durham.  Didn't hurt that we had good company.  Thanks again, Sarah, for making reservations and meeting up with us. 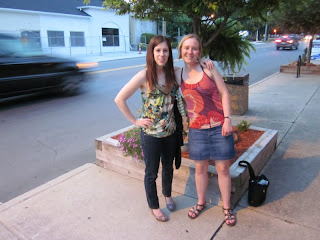 Runner ups: Med Deli in Chapel Hill and Which 'Wich in Johnson City.   I'm a sucker for grilled vegetables and feta cheese and basically any kind of hot sandwich.

Four words- seafood nachos in Cleveland.
Runner up: The Zorb in Gatlinburg.  While there was no way I was going to roll down a hill in a giant bubble, I thought the concept was- insane. 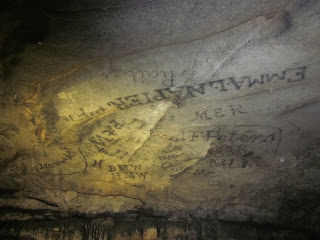 Worst graffiti: All the writing on every surface of every house in Cades Cove.  It was terrible!
Strangest Historical Re-enactment:
The kids from the inner-city school carrying the Stars and Bars, re-enacting Pickett's charge in Gettysburg.  Daniel said he wasn't sure what he thought that meant about American society today.  Probably that it's universally true that kids like to yell and run.
And now for a final random mish-mosh of pictures:

Whew.  I feel so blessed that we are able to take a vacation like that and even more so that I have a few more days off to do laundry, stock the fridge, run errands*, and otherwise do what needs to be done before I start back to work on Tuesday.
Got any exciting vacation plans for the summer?  What's the longest car trip you've ever taken?  Anyone else wonder if it's ever going to get warm here in Madison?
*Like replacing the laundry detergent and bleach that was stolen from us while we were gone.  Very strange because 1.Whoever it was didn't bother with the dryer sheets and 2.In the almost three years we've been here, we've never had anything stolen before.
Posted by Chelsea at 10:10 AM